Welcome to the second edition of Rachael and Restoration (read more about this series here).

Taxidermy is all the rage right now, so it’s no shocker that Restoration Hardware has their own line of cast resin and iron beauties. 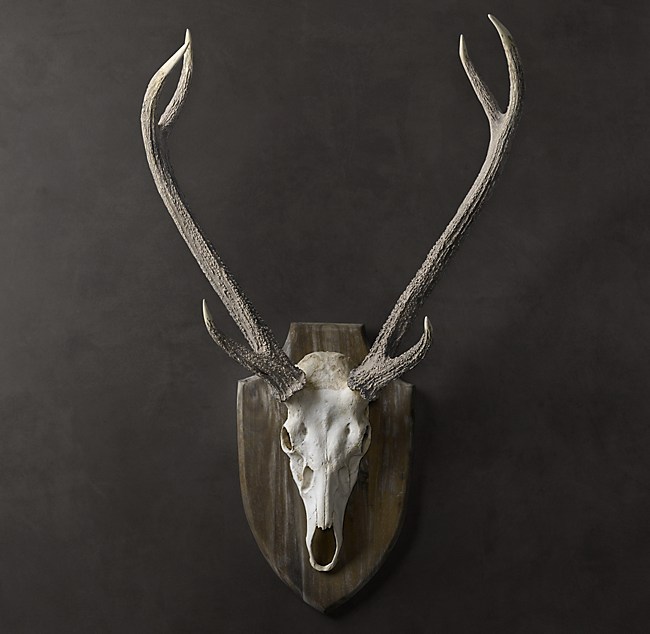 I had actually already started a taxidermy project before I saw some sweet versions in the RH catalog, so I finally had motivation to finish it up Once I was happy with my paper mache stag head, I spray painted him white then added fine white glitter with modge podge. Everyone needs a glitter stag head, right? It took me a little while to figure out how I wanted to mount him on the wall; I considered pallet wood, windows frames, picture frames, and other materials. But ultimately I decided to scope out the plaque selection at A.C. Moore to see if anything jumped out at me.

I found this awesome tall and shapely unfinished plaque that I thought would really compliment the shape of the stag head. And it was perfect! Then all I had to do was figure out how to finish it. Do I go bold? I thought about busting out some crazy color spray paint. But, honestly the glitter really had to steal the show, and I wanted a nice rustic contrast to the bling as a background. Instead of getting out my Minwax Dark Walnut for such a small job (it’s oil and stinky), I used some glazing medium mixed with raw umber craft paint. Applied with a brush and wiped off with a rag, it does a great stain impersonation.

Before I attached the stag head, I hammered one of those teeth hangers on the back (critical that the timing of this step is right on). 24 hours later, the head is still attached, so I’m marking this as +1 in the victory category. What do you think? Here he is at the bottom of the stairwell (where the pallet memo frame used to be). My version is a little more glam than the RH version, but then again-so am I (bah ha ha).